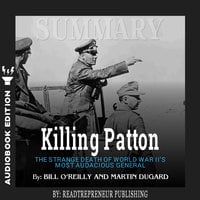 Killing Patton: The Strange Death of World War II's Most Audacious General by Bill O'Reilly | Book Summary | Readtrepreneur
(Disclaimer: This is NOT the original book, but an unofficial summary.)

Bill O'Reilly's Killing series has covered several history-changing murders, and now he covers the most mysterious one yet; George S. Patton alleged murder. Killing Patton follows up on General George S. Patton's death and does its best to cover the event surrounding his tragic death. Was it an accident? Or an act of assassination? Who would want him dead and why? To develop an opinion about this interesting topic, you must hear Bill O'Reilly's thought about it.

(Note: This summary is wholly written and published by readtrepreneur. It is not affiliated with the original author in any way)

"Great leaders take care of their men first, and then worry about their own needs." – Bill O'Reilly

A brilliant general and a tragic death. General George S. Patton has always been alluring to the public, but before Killing patton there hasn't been a coverage about his death so well-written as this one. A fantastic opportunity to read about the intricacies about this man's life. Bill O'Reilly takes you to the final year of World War II where you will read everything you need to know about the most audacious general of this conflict.

P.S. Killing Patton is an extremely informative book that will sate your curiosity about the mysteries surrounding Patton's death.