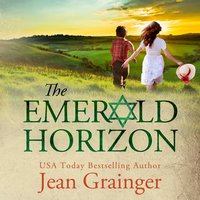 Ariella Bannon is being hunted. Someone is determined to betray her as a Jew, but she has survived against incredible odds, and the end is in sight. She will be reunited with her precious children, no matter what it takes.

Meanwhile, Liesl and Erich have found a home in Ireland away from the chaos of war-ravaged Europe. As the dark news of what has happened to the Jews filters through, they are torn - love for their mother and their home on one hand, and the profound sense of peace and belonging they have in Ballycreggan on the other. Like all of the other children who escaped Nazi territory on the Kindertransport, they must wait to hear the fate of their loved ones.

For their foster parents, Elizabeth and Daniel, their dearest wish, that Ariella would survive the war, is also their deepest fear. Would her return mean the loss of the children they have come to think of as their own?

As the Third Reich crumbles under relentless Allied bombs, Ariella is careful, but Berlin is a very dangerous place to be, and somebody knows she survived. Can she take one last enormous risk to be reunited with Liesl and Erich or will her betrayer see her finally captured?

The Emerald Horizon is the long awaited sequel to the best-seller, The Star and the Shamrock.