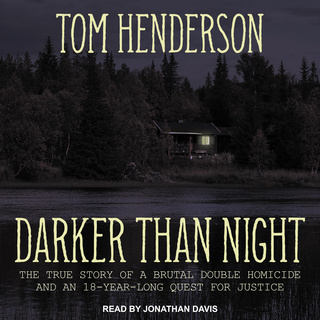 Darker than Night: The True Story of a Brutal Double Homicide and an 18-Year Long Quest for Justice

Darker than Night: The True Story of a Brutal Double Homicide and an 18-Year Long Quest for Justice

Författare: Tom Henderson
Inläsare: Jonathan Davis
Format: Finns som ljudbok
11T 38min
Engelska
3,08
In 1985, two twenty-seven-year-old friends left their suburban Detroit homes for a hunting trip in rural Michigan. When they did not return, their families and police suspected foul play. For eighteen years, no one could prove a thing. Then, a relentless investigator got a witness to talk, and a horrifying story emerged.

In 2003, this bizarre case hit the glare of the criminal justice system, as prosecutors charged two brothers, Raymond and Donald Duvall, with murder. With no bodies ever found, the case hinged on the testimony of one terrified witness who saw a bloody scene unfold-and who was still nearly too frightened to talk.

Now, the truth behind an eighteen-year-old mystery is revealed against the backdrop of an unusual, electrifyingly dramatic trial. Raymond and Donald Duvall bragged to friends that they killed their victims, chopped up their bodies, and fed them to pigs. A Michigan jury soon had evidence of this brutally methodical execution-evidence that would lead a shocked courtroom through the heart of evil and beyond a shadow of a doubt.
Mer info om ljudboken:
Förlag: Tantor Audio
Utgiven: 2017-04-11
ISBN: 9781541470880
11T 38min
Engelska
3,08
Kategori: Fakta
True Crime

Innocent Blood: A True Story of Obsession and Serial Murder

Angel of Darkness: The True Story of Randy Kraft and the Most Heinous Murder Spree of the Century

Reasonable Doubt: A Shocking Story of Lust and Murder in the American Heartland

Woman at the Devil's Door: The Untold Story of the Hampstead Murderess

Under Cover of the Night: A True Story of Sex, Greed, and Murder

Gitchie Girl Uncovered: The True Story of a Night of Mass Murder and the Hunt for the Deranged Killers

Such Good Boys: The True Story of a Mother, Two Sons and a Horrifying Murder

Cellar of Horror: The Story of Gary Heidnik