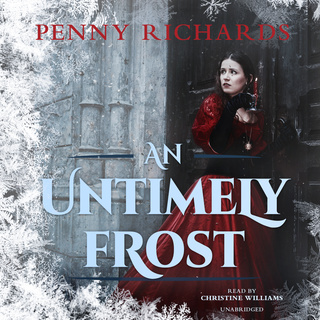 Chicago, 1881. The idea of a female detective is virtually unheard of. But when famed crime buster Allan Pinkerton opens his agency’s doors to a handful of women, one intrepid actress with her own troubled past is driven to defy convention and take on a new and dangerous role.

Since the age of eleven, when her mother was murdered, the life of the theater is all Lilly Long has known. Now twenty-two, she has blossomed into an accomplished Shakespearean actress. But after her innocence—and her savings—are taken from her by a seductive scoundrel, Lilly vows to leave the stage, enter the real world, and save others from a similar fate. Following in the footsteps of the country’s first female detective, Lilly persuades Allan Pinkerton to take her on.

Lilly’s acting skills are a perfect fit for her real-life role as a Pinkerton operative. But her first case is a baptism by fire as she is sent to the small town of Vandalia to solve the mystery of a pastor who disappeared with his family—and the church’s funds. When Lilly arrives, she finds the mere mention of the reverend’s name provokes enmity or suspicious silence. Shadowed by a second Pinkerton agent with an agenda of his own, Lilly begins to uncover Vandalia’s sordid secrets. But she’ll have to deliver the performance of a lifetime to survive the final act of this drama.
Mer info om ljudboken:
Förlag: Blackstone Publishing
Utgiven: 2016-07-26
ISBN: 9781504728737
7T 29min
Engelska
3,8
Kategori: Deckare
Serie: The Lilly Long Mysteries: 1
Historisk roman Historiska romaner Historiska deckare Julmord

A Gentlewoman's Guide to Murder

Tyrant of the Mind