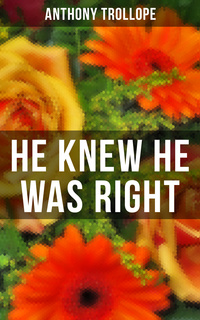 Författare: Anthony Trollope
Format: Finns som e-bok
Engelska
"He Knew He Was Right" is a novel written by Anthony Trollope which describes the failure of a marriage caused by the unreasonable jealousy of a husband exacerbated by the stubbornness of a wilful wife. As is common with Trollope's works, there are also several substantial subplots. Trollope makes constant allusions to Shakespeare's Othello throughout the novel. A wealthy young English gentleman, Louis Trevelyan, visits the fictional Mandarin Islands, a distant British possession, and becomes smitten with Emily Rowley, the eldest daughter of the governor, Sir Marmaduke Rowley. The Rowleys accompany Trevelyan to London, where he marries Emily. When the rest of the family goes home, Emily's sister Nora remains behind, under Trevelyan's protection…

Anthony Trollope (1815-1882) was one of the most successful, prolific and respected English novelists of the Victorian era. Some of his best-loved works, collectively known as the Chronicles of Barsetshire, revolve around the imaginary county of Barsetshire. He also wrote perceptive novels on political, social, and gender issues, and on other topical matters. Trollope's literary reputation dipped somewhat during the last years of his life, but he regained the esteem of critics by the mid-twentieth century.
Mer info om e-boken:
Förlag: Musaicum Books
Utgiven: 2017-08-07
ISBN: 9788027202157
Engelska
Kategori: Romance
Historisk Romance

The Adventures of Two Alabama Boys

On The Trail Of Deserters

The Confidence-Man: His Masquerade

The Campaign of 1776 around New York and Brooklyn

History of the Civil War