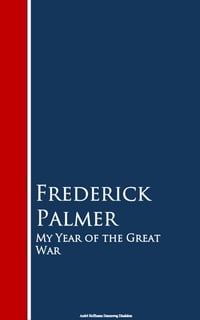 My Year of the Great War

My Year of the Great War

Författare: Frederick Palmer
Format: Finns som e-bok
Engelska
In "The Last Shot,” which appeared only a few months before the Great War began, drawing from my experience in many wars, I attempted to describe the character of a conflict between two great European land-powers, such as France and Germany.

"You were wrong in some ways,” a friend writes to me, "but in other ways it is almost as if you had written a play and they were following your script and stage business.”

Wrong as to the duration of the struggle and its bitterness; right about the part which artillery would play; right in suggesting the stalemate of intrenchments when vast masses of troops occupied the length of a frontier. Had the Germans not gone through Belgium and attacked on the shorter line of the Franco-German boundary, the parallel of fact with that of prediction would have been more complete. As for the ideal of "The Last Shot,” we must await the outcome to see how far it shall be fulfilled by a lasting peace.

Then my friend asks, "How does it make you feel?” Not as a prophet; only as an eager observer, who finds that imagination pales beside reality. If sometimes an incident seemed a page out of my novel, I was reminded how much better I might have done that page from life; and from life I am writing now.

I have seen too much of the war and yet not enough to assume the pose of a military expert; which is easy when seated in a chair at home before maps and news despatches, but becomes fantastic after one has lived at the front. One waits on more information before he forms conclusions about campaigns. He is certain only that the Marne was a decisive battle for civilisation; that if England had not gone into the war the Germanic Powers would have won in three months.
No words can exaggerate the heroism and sacrifice of the French or the importance of the part which the British have played, which we shall not realise till the war is over.
Mer info om e-boken:
Förlag: anboco
Utgiven: 2016-09-26
ISBN: 9783736416109
Engelska
Kategori: Biografier

The King Over The Water

The Crimes of England

My Life As An Abolitionist

In the Fourth Year

The Complete Papers And Writings Of Abraham Lincoln

The History of Freedom (and other Essays)

Father Brown Complete Series - All 51 Short Stories in One Edition