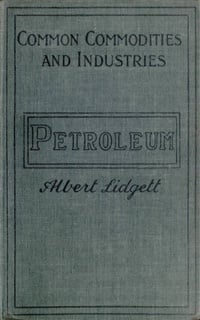 Författare: Albert Lidgett
Format: Finns som e-bok
Engelska
5
Although numerous volumes have been written upon petroleum, and some very educational works on this important subject are to be found in technological literature, it is strange that prior to the appearance of this little book, it has been impossible to turn to any publication which deals with this Common Commodity of Commerce in a popular manner.

Of a truth, we to-day live in an age of Oil, for the products of petroleum are inseparable from our daily life. Refined petroleum breathes the breath of power to the internal combustion engine which claims a realm of its own on land and sea, in the air, and under ocean waters; it also gives artificial light to countless millions in all corners of the world under a variety of circumstances and dissimilar conditions, while the wheels of industry unceasingly revolve consequent upon oil lubrication.

And in no sphere of commercial and industrial activity has greater progress been made during the past few decades than in regard to the multiplication in the uses of the products of petroleum. The avenues for advantageous consumption are constantly increasing, and this to such an extent that the production of crude petroleum—enormous though this is—has been outstripped by the demands for the refined product.

In the following pages I have striven to deal with the chief phases of the petroleum industry in a manner which, I have reason to believe, will be acceptable to the general reader, and the fact that the volume is iv written in language free from technicalities, will, I trust, render it particularly interesting to those who would know something of that immense class of commercial products covered by the name "Petroleum."

How the Other Half Banks

How to Create and Preserve Wealth that Lasts Generations

The Complete Guide to Investing in Bonds and Bond Funds

All the Presidents' Bankers: The Hidden Alliances That Drive American Power

Conspiracies of the Ruling Class

A Field Philosopher's Guide to Fracking: How One Texas Town Stood Up to Big Oil and Gas

How to Grow Rich with The Power of Compounding

The Little Book of the Shrinking Dollar: What You Can Do to Protect Your Money Now

Investing 101: From Stocks and Bonds to ETFs and IPOs, an Essential Primer on Building a Profitable Portfolio