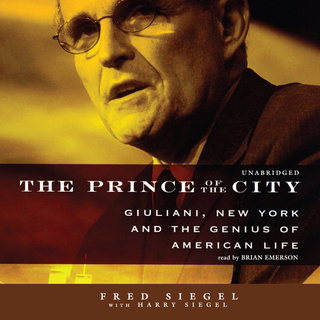 The Prince of the City

The Prince of the City

Författare: Fred Siegel
Inläsare: Brian Emerson
Format: Ljudbok
14T 24min
Engelska
In the dark days after the 9/11 terrorist attacks, Rudy Giuliani established himself as “America’s mayor.” This first post-9/11 account of his career shows how Giuliani’s successes in New York set a promising example for the rejuvenation of our major cities.

As one who has worked with him as well as studied him, Fred Siegel regards Giuliani as a shrewd tactician and artist of the possible, who could have stepped out of the pages of Machiavelli’s The Prince. A self-promoting, self-absorbed man, the mayor made his enormous ego and tribal ethos serve the city’s well-being, promoting ideals that transcended New York’s ethnic politics and business as usual. The Prince of the City is at once a fascinating character study, a history of New York over the last forty years, and a classic inquiry into the issue of how cities thrive or die.
Mer info om ljudboken:
Förlag: Blackstone Publishing
Utgiven: 2006-01-01
ISBN: 9781483065472
14T 24min
Engelska
Kategori: Biografier
True Crime

The Ascent of George Washington: The Hidden Political Genius of an American Icon

A Mormon in the White House?

The Wars of the Roosevelts

AOC: The Fearless Rise and Powerful Resonance of Alexandria Ocasio-Cortez

House of Abraham: Lincoln and the Todds, a Family Divided by War

JFK and the Unspeakable: Why He Died and Why It Matters