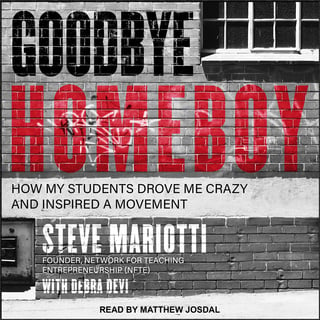 Goodbye Homeboy: How My Students Drove Me Crazy and Inspired a Movement

Goodbye Homeboy: How My Students Drove Me Crazy and Inspired a Movement

Tortured by nightmares about the teens who roughed him up, Steve Mariotti sought counseling. When his therapist suggested that he face his fears, Mariotti closed his small import-export business and became a teacher at the city's most notorious public school–Boys and Girls High in Bed-Stuy.

Although his nightmares promptly ceased, Mariotti's out-of-control students rapidly drove him to despair. One day, Mariotti stepped out of the classroom so his students wouldn't see him cry. In a desperate move to save his job, he took off his watch and marched back in with an impromptu sales pitch for it. To his astonishment, his students were riveted.

Mariotti realized his students felt trapped in soul-crushing poverty. They saw zero connection between school and improving their lives. Whenever Mariotti connected their lessons to entrepreneurship, though, even his most disruptive students got excited about learning.

The Science of Getting Rich

The Words of My Father: Love and Pain in Palestine

Dispatches from the Edge

To Serve the People: My Life Organizing with Cesar Chavez and the Poor

The Making of Her: Why School Matters

West Winging It: An Un-presidential Memoir

From Here to Eternity: Traveling the World to find the Good Death

Shook One: Anxiety Playing Tricks on Me

Narrative of the Life Frederick Douglass

Sweat the Technique: Revelations on Creativity from the Lyrical Genius