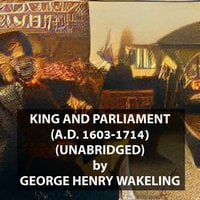 This slim volume by the Oxford University lecturer, George Henry Wakeling, deals with the period in British history from the reign of King James I through the death of Queen Anne. The story begins with England, transformed by the Protestant Reformation and keen to confront Catholic Spain, but burdened by a monarch unequal to national ambitions. Wakeling portrays the subsequent battles for dominance between the contending Protestant sects and chronicles the struggle for sovereignty between the British Crown and the emerging power of Parliament. - Summary by Pamela Nagami