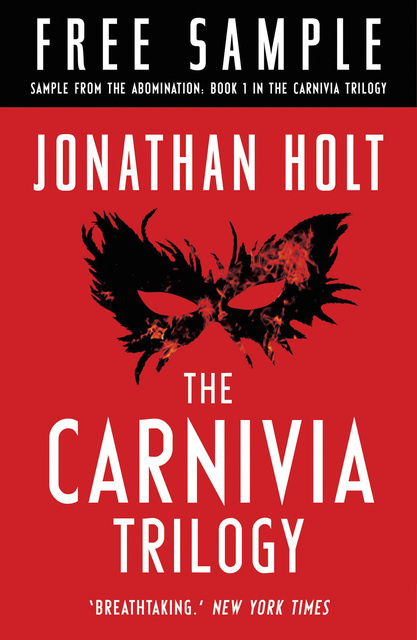 One secret can change everything.

This is Part One of Book One in a compulsive conspiracy thriller revealing a secret that will re-write history. For all fans of Stieg Larsson or Dan Brown.

It is Carnival in Venice, and fireworks burst in the midnight sky as masked figures dance and drink on the streets below.

But on the church steps of Santa Maria, there is a deathly hush. A body has washed up from the Grand Canal: a woman, wearing the robes of a Catholic priest. An Abomination.

Captain Kat Tapo is young and ambitious and this is her first murder case. Fresh evidence leads her deep into Venice's murky backwaters... but then the trail goes cold.

Lieutenant Holly Boland is a US soldier, born and raised in Italy. She's investigating the murder of a female activist, found in a canal – and she's just been ordered to destroy evidence.

Daniele Barbo, reclusive hacker, is guardian of the encrypted website, Carnivia.com for those who trade in secrets. Here, in the virtual city of Venice, the identities of the dead women lie hidden in plain sight. Did these two women die for what they believed? Or what they knew?

With official channels closed, the truth is out of reach. Until Kat, Holly and Daniele uncover a dark secret from Italy's wartime past. At its centre is a dangerous alliance of powerful men within the Church, the CIA, and NATO... Men who would kill to keep the truth hidden...

This is PART 1 of BOOK 1, The Abomination, the first thriller in The Carnivia Trilogy. The Abomination is currently available as a full ebook and has been on sale since May 2013.