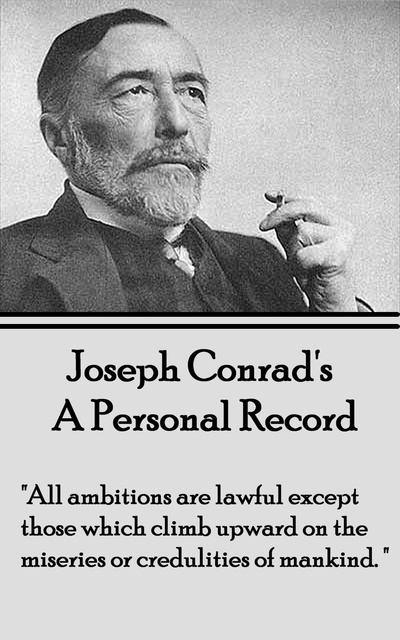 A Personal Record: "All ambitions are lawful except those which climb upward on the miseries or credulities of mankind."

A Personal Record: "All ambitions are lawful except those which climb upward on the miseries or credulities of mankind."

A Personal Record (1912) is a very important, but not complete, biographical work of the English writer from Polish origins, Joseph Conrad. In the “Familiar Preface” to the work, Conrad declares that: “Those who read me know my conviction that the world, the temporal world, rests on a few very simple ideas; so simple that they must be as old as the hills. It rests notably, among others, on the idea of Fidelity.” Throughout the different parts of the book, it is made clear that the author’s main concern is the way he will be seen by his British readership. A Personal Record actually comes at a certain time of the author’s life when he has already made a name and gained considerable respect as a confirmed novelist and intellectual. In the beginning, Conrad speaks about his childhood and schooling in his native Poland where he recounts memories of struggle and repression. He then speaks about his escape to the city of Marseille in France and his falling in love with sea adventures, which represents the foundation of his most successful literary works. The book also provides some details related to his writing activity, namely to the writing of his first novel Almayer’s Folly.