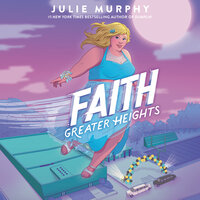 Faith Herbert can finally admit that she’s not a regular teen—and take advantage of her new flying superpowers. After the chaos of her first semester, Faith just wants to end her senior year in a normal way—enjoying all the hallmarks of graduating high school, like prom, with her best friends Matt and Ches.

But a cryptic warning about psiots going missing and a rash of inexplicable fires means things are off to a strange start. Life goes from weird to worse when Colleen Bristow, the quiet nerd-turned-supervillain, reappears, acting like nothing ever happened.

As if that weren’t enough, rumored sightings of Faith’s ex, the beautiful Dakota Ash, who was thought to have died months ago in the warehouse fire that exposed more than a few secrets, start to emerge. Faith can’t seem to shake Dakota’s betrayal from that tragic day, but she also can’t help hoping the rumors are true. . . .

As Faith tries to balance her quest for a memorable senior year and the heartbreak of Grandma Lou’s increasing decline, she learns to have faith in herself—and that sometimes fate will point you in the right direction.