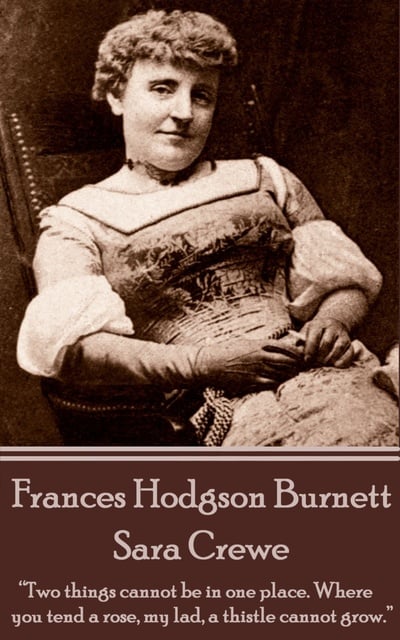 Frances Hodgson Burnett - Sara Crewe: “Two things cannot be in one place. Where you tend a rose, my lad, a thistle cannot grow.”

Frances Hodgson Burnett - Sara Crewe: “Two things cannot be in one place. Where you tend a rose, my lad, a thistle cannot grow.”

The eponymous heroine of Frances Hodgson Burnett’s Sara Crewe (1888) is a seven-year-old girl. She is the daughter of a wealthy tradesman who has left her at Miss Minchin’s boarding school while being engaged in his trade in the Indian subcontinent. Thanks to the financial status of her father, the school’s headmistress Miss Minchin treats Sara like a princess. This special treatment does not spoil the little child, though. On the contrary, Sara develops the moral qualities of a noble lady, showing signs of generosity and modesty among her school peers. Nonetheless, things turn completely upside down when she receives news about the death of her father and the theft of his great fortunes. Miss Minchin’s true face is now unveiled as she decides to make of Sara her own servant and deprives her of all her previous advantages. Sara has to endure hunger, cold and the wickedness of some of her schoolmates. After episodes of psychological and physical suffering through which Sara shows great patience and confidence in her values, it turns out that her father’s fortunes have not been stolen. Her father’s friend, Mr. Carrisford, appears to inform her that he has been looking for her to hand her the money that has even doubled since her father’s death.