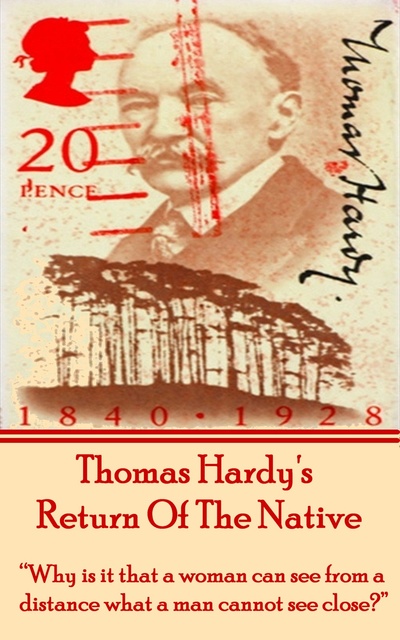 Return Of The Native, By Thomas Hardy: "Why is it that a woman can see from a distance what a man cannot see close?"

Return Of The Native, By Thomas Hardy: "Why is it that a woman can see from a distance what a man cannot see close?"

Thomas Hardy (2nd June 1840 – 11th January 1928), celebrated poet and writer, was born in a modest thatched cottage near Dorchester in the West country, to a builder father. His mother came from a line of intelligent, lively and ambitious women so ensured her son had the best formal education available for their modest means although this ended when he was 16.

He became a draughtsman specialising in the building of churches was able to give it up to be a full time writer and poet with the publication of Far From the Madding Crown which became a bestseller and like much of his work was serialised. His writing reflects his passionate beliefs for social reform and exposes the hypocrisy of the rules of the Victorian age which constrained many freedoms with convention and restricted the transcending of class boundaries.

His novels are almost entirely set in rural Wessex which although fictional is clearly rooted in the SW counties of England where he was born and lived most of his life. Hardy’s writing caused controversy in his lifetime but despite this he was highly praised and showered with honorary doctorates from many universities, a knighthood, which he refused and in 1910 the prestigious Order of the Merit. Return of the Native opens with an evocative description of the bleak brooding Egdon Heath which is not only the setting for the book but also anticipates the dark tone of the novel. The native in the title is Clym Yeobright who is returning to the place where he grew up to settle and be a positive part of the community which was missing from his life in Paris.

He falls in love with the tempestuous Eustacia Vye who dreams of passionate love and is dazzled by the idea of a life in Paris which would liberate her from the stifling claustrophobia she feels in Egdon. Marriage accentuates her restlessness and resolve to escape causing frustration, disappointment, betrayal and tragedy.

Hardy provides a poetic compassion for both characters and creates powerful scenes heightening the dramatic tension and making this a special read.