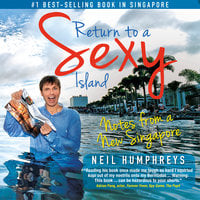 Return to a Sexy Island

Singapore got sexy and the country’s best-selling author got jealous. After five years chasing echidnas and platypuses in Australia, Neil Humphreys returns to Singapore to see if the rumours are true. Like an old girlfriend getting a lusty makeover, the island transformed while Humphreys was away. Singapore is not just a sexier island, it’s a different world.

So Humphreys embarked upon a nationwide tour to test that theory. He went in search of new Singapore, visiting only locations that either did not exist five years ago or had been extensively rebuilt, renovated or revamped in his absence. From the cloud-topped heights of Marina Bay Sands and Pinnacle@Duxton to making ill-advised bomb jokes at the subterranean tunnels of Labrador Park, Humphreys walks, cycles, kayaks and swims across a rapidly evolving country, meeting Guinness-swigging aunties in Resorts World Sentosa, eccentric toy museum owners in Bugis, political activists in Aljunied and a security guard at Marina Barrage ready to ‘tekan’ anyone who crosses his path. In new Singapore, Humphreys discovers a country still grappling between the economic rewards of progress at Biopolis and Fusionopolis and the historical cost at Bukit Brown Cemetery.

With Humphreys’ characteristic honesty and wit, Return to a Sexy Island provides an insightful account of new Singapore; its best bits, it ugly bits and, most importantly of all, what it’s really like to pee in the world’s best toilet. Every Singapore resident and visitor should read this book.