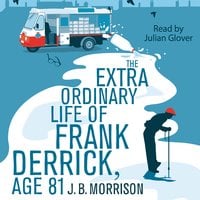 Frank is eighty-one. He lives on his own, his daughter and her young family are living in America. He watches DVDs, keeps an eye on the neighbours, eats tinned spaghetti, and has a cat called Bill (which made more sense before Ben died). It was tough enough to fill the hours of the day when he was active. But Frank has just been run over by a milk float.

And then into his life comes Kelly Christmas, home help. Young enough not only to be his daughter but to be his daughter’s daughter, with her little blue car and appalling parking, her cheerful resilience and ability to laugh at his jokes, Kelly changes Frank’s life.

Can Frank raise the funds to continue to afford Kelly’s visits? Or is their time together about to run out, just when Frank had started to get used to it? And what on earth will Frank do without her?

Frank and Kelly’s story is sad and funny, moving, familiar, uplifting. It is a small and perfect look at a life neither remarkable nor disastrous, but completely extraordinary nonetheless. For fans of The Unlikely Pilgrimage of Harold Fry this is a quirky, life affirming story that has enormous appeal.