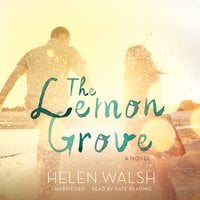 Jenn and Greg have been married for fourteen years, and, as the book opens, they are enjoying the last week of their annual summer holiday in Dei├á, a village in Majorca off the coast of southern Spain. Their days are languorous, time passing by in a haze of rioja-soaked lunches, hours at the beach, and lazy afternoon sex in their beautiful villa. It is the perfect summer idyll—until Greg's teenage daughter, Emma, arrives with her new boyfriend, Nathan, in tow.

What follows, over the course of seven days, is a brilliantly paced fever dream of attraction between Jenn and the reckless yet mesmerizing Nathan. It is an intense pas de deux of push and pull, risk and consequence, and moral rectitude, as it gets harder and harder for Jenn to stifle her compulsion.

This is a very smart novel about many things: the loss of youth, female sexuality, the lure of May-December temptation, the vicissitudes of marriage and the politics of other people's children. It is simultaneously sexy and substantive, and Helen Walsh's masterful, evenhanded tone can't help but force the reader to wonder, what would I have done?

Beautifully written with the tension of a rubber band just about to snap, The Lemon Grove is a book that will have people talking all summer long.