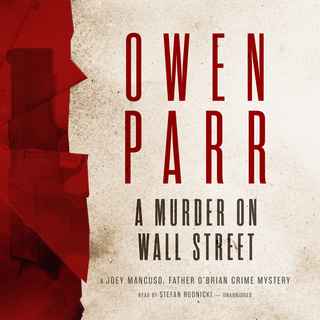 A Murder on Wall Street

A Murder on Wall Street

Lucky for readers, that’s a great opportunity for the kind of rare mystery series with something for everyone—a tough guy, three awesome women, and a classic Golden Age gentleman-detective clergyman. The twist? The cop and the cleric are half-brothers who operate a PI firm out of their bar.

Owen Parr pulls off a crowd-pleasing coup in the first entry in his Joey Mancuso/Father Dominic O’Brian series—a perfect blending of the hard-boiled and intellectual schools of detecting. Joey’s the ex-cop, who got kicked out of the police department by means of a small frame, and the women are a fiery FBI agent (Joey’s elusive Cuban girl friend), a glamorous “researcher,” and perhaps most memorable of all, Joey’s mentor and ex-partner, Lucifer—officially Lucy, but what a nickname!

Captain O’Brian’s Pub and Cigar Bar, with its old-world New York warmth and reliably friendly Irish bartender is a character in itself, the kind of place that’s like home to its devotees. So when one of the brothers’ best customers dies in an apparent suicide—a Wall Street guy celebrating a new client the night before—they’re just not feeling it. They know he wasn’t a guy who wanted to die; and they quickly find out he was someone a lot of people wanted dead.

It’s a made-to-order financial puzzle for a couple of seasoned New York PI’s, with the kind of twists and scams and puzzles that warm a mystery fan’s heart like a shot of Jameson.

Fans of New York detective shows from Blue Bloods to Elementary will find it right up their alley, and devotees of Golden Age mysteries will love it, especially those set in New York, like Ellery Queen and Nero Wolfe; and those starring brainy clergymen, like Father Brown, the Rabbi, and Father Dowling.
Wydawca: Skyboat Media
Data wydania: 2017-05-09
ISBN: 9781538435076
5H 17M
Angielski
3,4
Kategoria: Kryminał

King of the Weeds

Baptism for the Dead

She Stopped for Death

Edwin of the Iron Shoes

A Murder on Long Island

Quarry in the Black

A Dark So Deadly

But For The Grace

Murder at the Cat Show

Another Thing to Fall