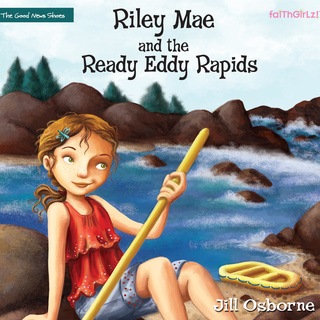 Life is rapidly changing for pre-teen shoe spokesperson Riley Mae. After escaping near disaster at the top of Half Dome in Yosemite, Riley, her family, and her Swiftriver co-workers fly to a secret hideout in Northwest Montana. But when the plane’s malfunction leads to a rough landing, Riley wants nothing more than to return to friends, church, and home. Then she meets Sunday, a ten-year-old boy from Kenya who wrestles fish, battles bears, and tackles leukemia. While her rigorous raft training for the marketing campaign brings a few bumps and bruises, Riley now feels up for the challenge.

Everything looks as bright as the glistening fool’s gold on her “Ready Eddy” river sandals, but everything is not as it seems. Riley soon learns that life is as unpredictable as the raging waters, which, if she is not careful, will sweep her away and into the hands of an enemy who is even closer than she thinks.
Wydawca: Oasis Audio
Data wydania: 2014-01-28
ISBN: 9781621883302
4H 36M
Angielski
5
Kategoria: Dla dzieci
Od 6 do 9 lat

The Next Door Series

A New Hat For Myrtle

A Whisper and a Wish

The Berenstain Bears and the Rowdy Crowd

Flight of the Eagles

The Door in the Dragon's Throat