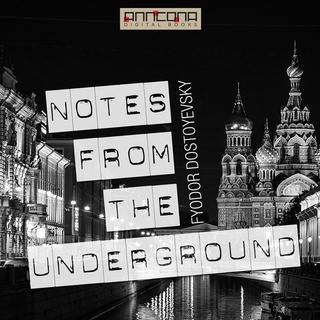 It presents itself as an excerpt from the rambling memoirs of a bitter, isolated, unnamed narrator (generally referred to by critics as the Underground Man) who is a retired civil servant living in St. Petersburg.

The first part of the story is told in monologue form, or the underground man's diary, and attacks emerging Western philosophy. The second part of the book is called 'Àpropos of the Wet Snow,' and describes certain events that, it seems, are destroying and sometimes renewing the underground man, who acts as a first person, unreliable narrator.

The stylistic inventiveness, and the insights into the absurdities and weakness of humans seem so fresh and incisive today that if published now (a century and a half later), Notes From The Underground would be considered an avant-garde post-modernist triumph. In some ways this is a heavy text, laden with conversational philosophizing; but the vividness of the narrator make it a wonderful read, and funny.

Although he began writing in the mid-1840s, his most memorable works-including Crime and Punishment, The Idiot and The Brothers Karamazov-are from his later years. His output consists of eleven novels, three novellas, seventeen short novels and three essays. Many literary critics rate him as one of the greatest and most prominent psychologists in world literature.
Tłumaczenie: Frederick Whishaw
Wydawca: Anncona Media AB
Data wydania: 2015-12-03
ISBN: 9789176055229
Wydawca: Anncona Media AB
Data wydania: 2015-11-23
ISBN: 9789176055212
5H 3M
Angielski
4,27
Kategoria: Klasyka

Journey to the End of the Night