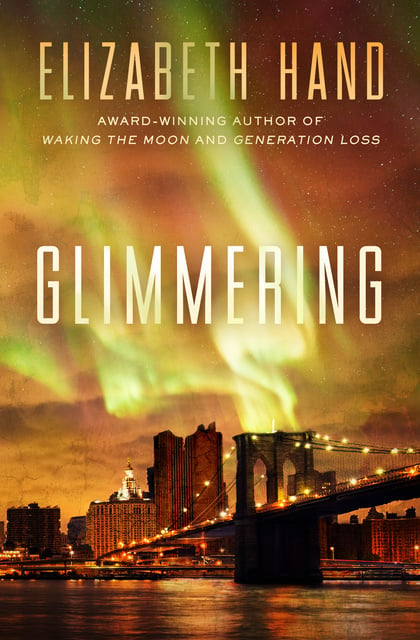 “If Stephen King set out to rewrite The Waste Land as a novel, the result might resemble Glimmering.” —The Washington Post

Climate change, rampant viruses, blackouts, fundamentalists—the end of the end has arrived. Glimmering, the 1994 dystopian novel by Nebula and World Fantasy Award–winning author Elizabeth Hand, is now timelier than ever.

When the confluence of a solar storm and the collapse of the Antarctic ice shelf ignites the atmosphere like grease, those who are able hide behind their walls and masks, seeking the promise of a seductive—and dangerous—future. As the earth erupts in flames, department store heir and editor Jack Finnegan faces his own inevitable death from AIDS in his family’s decrepit mansion near the Hudson River—that is, until an old friend offers him a miraculous cure . . .

Christian singer Trip Marlowe has found worldwide success, but the dynamic rock star retains his strict morality and faith. Temptation comes in the form of a mysterious blond waif and IZE, a new drug more addictive than crack and heroin . . .

The two men will find themselves on a bizarre collision course as a dark and powerful force seeks to shape what’s left of humanity’s consciousness.

“A brutal vision of Apocalypse . . . Hand’s powerful vision of these days of wrath is not so much a protracted self-pitying whisper as a Nietzschean insistence on salvation through creative evolution.” —Publishers Weekly, starred review