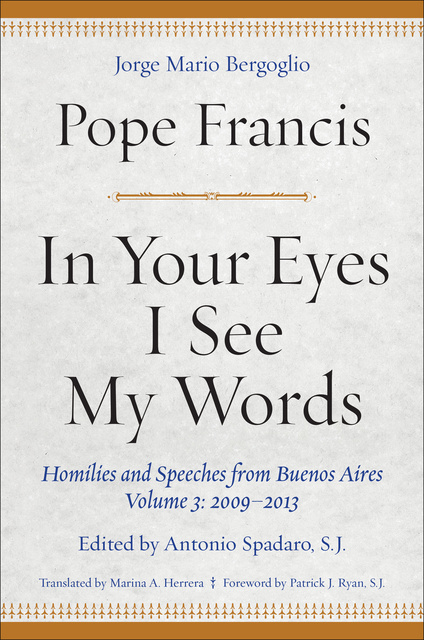 The homilies and speeches of Archbishop Cardinal Jorge Mario Bergoglio from 2009 through his election as Pope Francis in 2013.

These writings provide an intimate glimpse into the theological, philosophical, scientific, and cultural-educational currents that forged the steady, loving, and nurturing leadership style with which Jorge Mario Bergoglio guided the Church in Buenos Aires, Argentina. That style has now done the same for the Church from Rome, a Church rocked by financial and moral scandals, and a world shaken by the worst global pandemic in a century.

These writings were kneaded—a word he uses when talking about the work of molding the souls and character of youth and seminarians—in the relationships he formed in his bus rides to work and in his intense contact with all segments of the population. Because of that careful and prayerful process of kneading, they have found their full development in Bergoglio’s writing as Pope Francis, especially in Evangelii gaudium (November 2013); Gaudete et exsultate, On the call to sanctity (March 2018); and his encyclical Laudato si’ (May 2015). In this final volume of Bergoglio’s homilies and papers we meet European theologians and thinkers such as Hans Urs von Balthasar; Henri de Lubac; Bergoglio’s friend, the Uruguayan philosopher Methol Ferré, the literary figure Miguel Ángel Asturias, and Enrique Santos Discépolo, a singer and composer of tangos that decry corruption.

In a prophetic conclusion, the last homily of this volume is an outline of the roadmap Pope Francis has followed throughout his papacy: one defined by ongoing love and care for God’s people that seeks to spread God’s merciful anointing to those living on the margins of life.