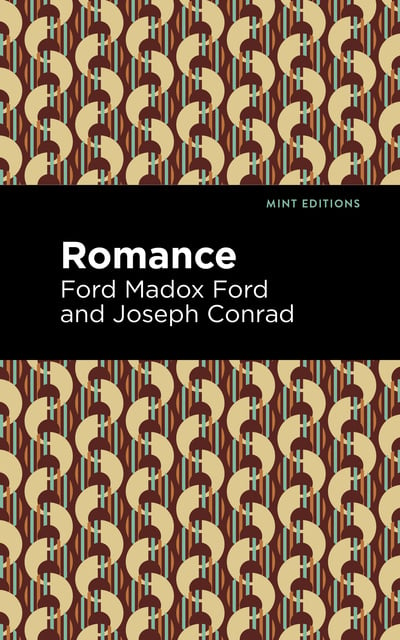 Romance (1903) is a novel by Ford Madox Ford and Joseph Conrad. One of just three collaborations between two of the greatest English language novelists of the twentieth century, Romance plays to the strengths of each author to weave a tale of adventure, bad luck, and political intrigue. Adapted into The Road to Romance (1927), a lost silent film, Romance remains a highly entertaining and largely forgotten work of English fiction.

“What are these days to me? But that far-off day of my romance, when from between the blue and white bales in Don Ramon's darkened storeroom, at Kingston, I saw the door open before the figure of an old man with the tired, long, white face, that day I am not likely to forget.” Forced to flee his native England after being accused of smuggling, John Kemp joins his cousin Carlos in Jamaica. Soon, however, he grows wary of their comrade Castro, a shadowy figure who poses a danger to Kemp’s anonymity.

Setting out on his own, he crosses paths with O’Brien, a notorious Irish nationalist who sees in Kemp an easy target for manipulation. Once again forced to flee for his life, Kemp searches for his cousin, only to find him on his deathbed. Left with no choice, he joins forces with Castro and the local beauty Serafina, who prove the greatest of friends.

Eminently entertaining, this swashbuckling adventure is perfect for fans of Conrad and Ford, or for anyone looking to escape into a world of unending romance. With a beautifully designed cover and professionally typeset manuscript, this edition of Joseph Conrad and Ford Madox Ford’s Romance is a classic work of British literature reimagined for modern readers.