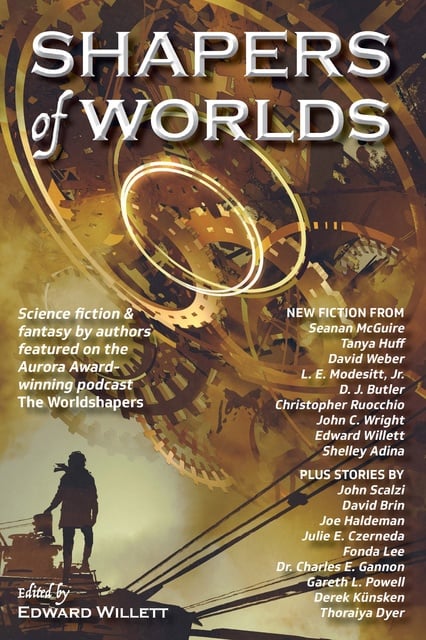 Shapers of Worlds: Science fiction & fantasy by authors featured on the Aurora Award-winning podcast The Worldshapers

Shapers of Worlds: Science fiction & fantasy by authors featured on the Aurora Award-winning podcast The Worldshapers

Within these pages lie eighteen stories, from eighteen worlds shaped by some of today’s best writers of science fiction and fantasy, all guests on the Aurora Award-winning podcast The Worldshapers during its first year. There are original stories from Tanya Huff, John C. Wright, L.E. Modesitt, Jr., Shelley Adina, Seanan McGuire, Christopher Ruocchio, D. J. Butler, David Weber, and Edward Willett, plus additional stories by John Scalzi, Julie E. Czerneda, Derek Künsken, Thoraiya Dyer, Gareth L. Powell, Fonda Lee, David Brin, Dr. Charles E. Gannon, and Joe Haldeman. Some are international bestsellers. There are winners and nominees for the Hugo, Nebula, World Fantasy, Aurora, Sunburst, Aurealis, Ditmar, British Science Fiction Association, and Dragon Awards. Some have been writing for decades, others are at the beginning of their careers. All have honed their craft to razor-sharpness.

A teenage girl finds something strange in the middle of the Canadian prairie. An exobiologist tries to liberate a giant alien enslaved on its homeworld by humans. The music of the spheres becomes literal for an Earth ship far from home. A superhero league interviews for new members. Strangers share a drink on a world where giant starships fall. Two boys, one a werewolf, one a mage, get more than they bargained for when they volunteer to fight an evil Empire. A man with amnesia accepts a most unusual offer. A young woman finds unexpected allies as she tries to win a flying-machine race in steampunk London . . .

Ranging from boisterous to bleak, from humorous to harrowing, from action-filled to quiet and meditative; taking place in alternate pasts, the present day, the far, far future, and times that never were; set on Earth, in the distant reaches of space, in fantasy worlds, and in metaphysical realms, each of these stories is as unique as its creator. And yet, they all showcase one thing: the irrepressible need of human beings to create, to imagine, to tell stories.

Praise for Shapers of Worlds

“One of the most wide-ranging volumes I’ve encountered in terms of sub-genre. It’s rather like a speculative fiction buffet, offering steampunk, fantasy, military fiction, magic, space opera, post-apocalyptic, hard science fiction, and others . . . Inventive and varied, the collection has a lot to offer for those seeking an interesting, entertaining, and thought-provoking read.” – Lisa Timpf, The Future Fire