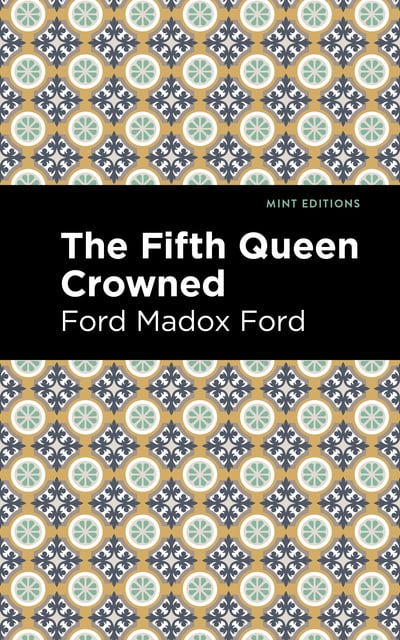 The Fifth Queen Crowned (1908) is a novel by Ford Madox Ford. The third and final instalment of Ford’s The Fifth Queen Trilogy is set during the reign of Henry VIII, a tumultuous time of political and religious oppression in a land at the mercy of a murderous King. Ford’s trilogy recreates Tudor England in a masterful story of court intrigue, romance, and betrayal. Focusing on the tragic figure of Katharine Howard, the fifth wife of the King, Ford investigates the interconnection of sex and power in a political atmosphere clouded by violence and espionage.

Depicting some of the era’s most notorious figures, including Thomas Cromwell, Bloody Mary, and the King himself, Ford makes history both entertaining and undeniably human. Brought to the court of King Henry VIII by her cousin Thomas Culpeper, Katharine Howard, a noblewoman whose family’s fortunes had been in decline for some time, inadvertently catches the eye of his majesty. Given a position as a lady in waiting for Lady Mary, Howard—though opposed by the brutally efficient schemer Thomas Cromwell—soon distinguishes herself in the eyes of the King, who makes her his fifth Queen.

In The Fifth Queen Crowned, he continues the story of Katharine in the aftermath of Thomas Cromwell’s demise. Now married to Henry VIII, she finds herself increasingly powerless at court and fears angering the King. Strong willed and eminently good, Katharine is drawn into the controversy surrounding Nicholas Throckmorton, who has been implicated in Wyatt’s Rebellion and thrown in prison.

As the King grows tired of her willpower and jealous of her relationship with Culpeper, her time as Queen grows increasingly tenuous. With a beautifully designed cover and professionally typeset manuscript, this edition of Ford Madox Ford’s The Fifth Queen Crowned is a classic work of British literature reimagined for modern readers.