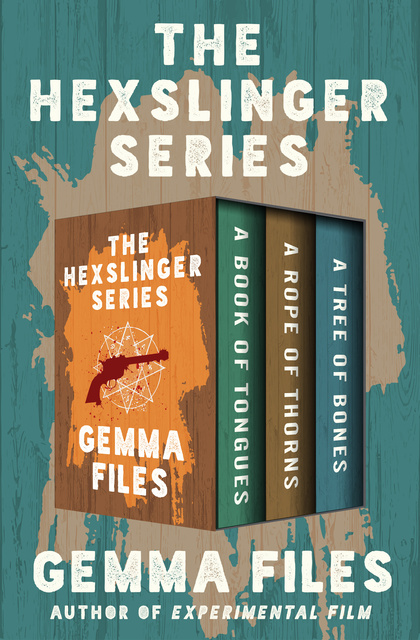 The Hexslinger Series: A Book of Tongues, A Rope of Thorns, and A Tree of Bones

The Hexslinger Series: A Book of Tongues, A Rope of Thorns, and A Tree of Bones

Saddle up for a wild ride through “boundary-busting horror-fantasy . . . [that] fully delivers both sizzling passions and dark chills” (Publishers Weekly).

A Book of Tongues
Pinkerton agent Ed Morrow is going undercover to infiltrate an outlaw gang led by former Confederate chaplain Asher Rook. But there is someone else who has Rook in her sights: the Lady of Traps and Snares, a bloodthirsty Mayan goddess who will stop at nothing to satisfy her own desires.

A Rope of Thorns
Infuriated at being betrayed by Rook, his former lover, and sacrificed in the name of the Mayan goddess who is Rook’s current consort, Chess Pargeter leaves a trail of death and destruction in his wake. But there is a resurrected lawman with a bone to pick with Chess—and a final judgment to deliver . . .

A Tree of Bones
A new Civil War is brewing, forcing Pinkerton-agent-turned-outlaw Ed Morrow, spiritualist Yancey Kloves, and even “Reverend” Asher Rook to choose what ruin or redemption means to each of them. Meanwhile, Chess Pargeter gears up for the greatest fight of his life—and death. A battle out of hell itself . . .

Plus three bonus stories set in the Hexslinger universe!

Praise for the Hexslinger Series

“Paints a stark, vivid, and gory picture of the ‘wild west’ in the years following the Civil War.” —Library Journal