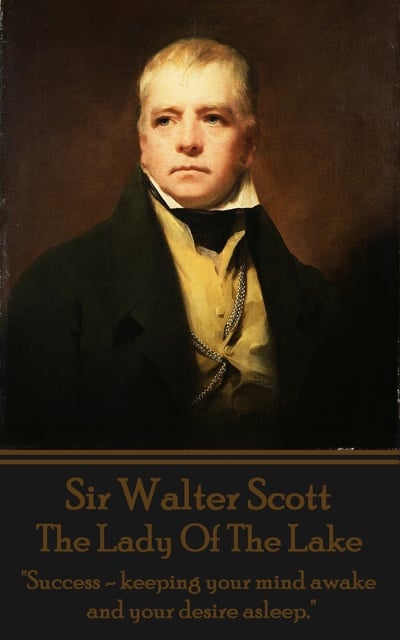 The Lady Of The Lake: "Success - keeping your mind awake and your desire asleep."

The Lady Of The Lake: "Success - keeping your mind awake and your desire asleep."

Sir Walter Scott, 1st Baronet, FRSE, was a Scottish playwright, novelist and poet who became the first English-language author to be internationally celebrated within their own lifetime. Although he wrote extensively, he was by profession an advocate and judge, and continued to practice alongside his writing career. Scott was fascinated by the oral tradition of the Scottish borders, with its poetry, folklore and legend, and he collected stories throughout his youth and as a young man, almost obsessively. Scott’s friend, James Ballantyne, had founded a printing press in 1796 , and had published much of Scott’s early work, including the Lay of the Last Minstrel which firmly established Scott’ position in the Scottish literary tradition, and that of English literature as a whole. Scott was by now printing regularly with the Ballantynes and convinced them to relocate their press to Edinburgh and became a partner in their business. In 1813 Scott was offered the post of Poet Laureate, but turned the offer down and the position was taken by Robert Southey. Until now he had predominately written poetry however he became interested in the novel form despite its comparative unpopularity for a supposed aesthetic inferiority. Owing to this he published his first novel, Waverley, anonymously, in 1814. Its success encouraged several more novels, all of which were published under “Author of Waverley” as a means of piggybacking the success of Waverley and because Scott feared his traditional father would disapprove of such a trivial pursuit as novel writing. Scott came to be known as the “Wizard of the North” for his writing, and among literary circles it was an open secret that he was the author of these novels. In 1815 the Prince Regent, George, dined with him as he wished to meet the “Author of Waverley”. By 1825 a banking crisis was crippling the nation and the Ballantyne printing company went under with Scott left with debts of £130,000 (approx. £10mil in 2014). His pride kept him from accepting financial aid (even from his admirer, King George) or declaring himself bankrupt. He resolved to continue writing until he could pay his debts. Compounding these unfortunate circumstances was the death of his wife in 1826. However, he maintained his enormous literary output until 1831 by which point his health had begun to fail and he died on September 21st 1832. At his death he was still in debt, the continuing sales of his work ensured that all debt was discharged shortly after he died.