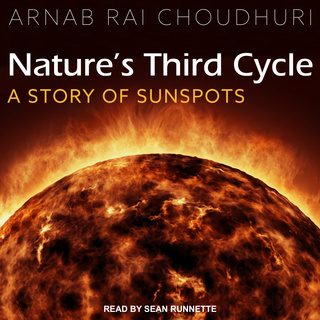 Schrijver: Arnab Rai Choudhuri
Voorlezer: Sean Runnette
Format: Beschikbaar als audioboek
10U 46M
Engels
3,18
The cycle of day and night and the cycle of seasons are two familiar natural cycles around which many human activities are organized. But is there a third natural cycle of importance for us humans? On 13 March 1989, six million people in Canada went without electricity for many hours: a large explosion on the sun was discovered as the cause of this blackout. Such explosions occur above sunspots, dark features on the surface of the Sun that have been observed through telescopes since the time of Galileo.

The number of sunspots has been found to wax and wane over a period of eleven years. Although this cycle was discovered less than two centuries ago, it is becoming increasingly important for us as human society becomes more dependent on technology. For nearly a century after its discovery, the cause of the sunspot cycle remained completely shrouded in mystery. The 1908 discovery of strong magnetic fields in sunspots made it clear that the eleven-year cycle is the magnetic cycle of the sun. It is only during the last few decades that major developments in plasma physics have at last given us the clue to the origins of the cycle and how the large explosions affecting the earth arise.

Nature's Third Cycle discusses the fascinating science behind the sunspot cycle, and gives an insider's perspective of this cutting-edge scientific research from one of the leaders of the field.
Meer info over het audioboek:
Uitgeverij: Tantor Audio
Verschenen: 2019-01-29
ISBN: 9781541448032
10U 46M
Engels
3,18
Categorie: Non fictie
Natuurkunde

The Beginning and the End of Everything: From the Big Bang to the End of the Universe

Death by Black Hole, and Other Cosmic Quandaries