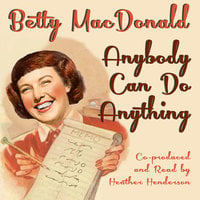 Anybody Can Do Anything

“Well, Betty MacDonald has done it again. Here is the merriest, maddest book of the year … with that fabulour MacDonald sparkle in every line of its fascinating pages. ” Marge Lyon, Chicago Sunday Tribune, August 27, 1950.

The Narrator:
We are incredibly fortunate to have the award winning Heather Henderson narrating Betty MacDonald’s wonderful memoirs. Heather’s warm voice, knack for characterizations and engagement with Betty MacDonald’s writing equal a superb listening experience. And we’re not the only one’s who have noticed. Henderson was a finalist in the 2015 Voice Arts Awards for her narration of The Egg and I, and a UK audible customer wrote:

“Not a reader I had come across but she is amazing – she brings out the fact that Betty was brought up to be a lady which makes her misadventures and tribulations even funnier – imagine Margo from The Good Life suddenly finding herself running a chicken farm! The characterization is vivid without being cartoonish, her pronunciation of certain words is (to my English ears) delightful and you can tell she is having a ball reading this book and is delighted to share it with you! Her reading is heartfelt, droll and wry. As Juliet Stevenson is to Jane Austen on audio so Heather Henderson is to Betty MacDonald – and there is no higher praise!”

The Audiobook:
Comedy is probably not the first thing that springs to mind when we recall the Great Depression, but when Betty MacDonald recounted her experiences of that “hard” and “dreary” era in Anybody Can Do Anything, she found lots to laugh about.

Chronologically, this book takes place after her misadventures on a chicken ranch – the subject of Betty’s first book, The Egg and I – and before her account of a year spent in a tuberculosis sanatorium, recounted in The Plague and I (both of which are also available in audio from Post Hypnotic Press). Despite the hilarity with which she described her time spent chicken farming, she was unhappy in her marriage and terribly lonely. Anybody Can Do Anything opens with her leaving the farm and her husband and making her way with her two children back to Seattle and the bosom of her family, just as the Depression begins. She and her family – a mother, a brother, and three sisters, plus her two young girls – live in a “modest dwelling in a respectable neighborhood, near good schools and adequate for a normal family. ” As the Depression goes on, they find much comfort in having that home and in having each other to rely on and commiserate with.

With two children to support, Betty was desperate for work as jobs became more and more scarce. But she also had her sister, Mary, an eccentric and energetic finder of jobs and organizer of people. Since childhood, Mary had been getting Betty in and out of situations. With Mary’s ‘can do’ attitude, Betty was propelled into jobs and sent on dates, regardless of whether she possessed the skills necessary for the job or had anything in common with her date. Betty credits Mary’s positive attitude with getting them through the hard years:

“Mary, one of those fortunate people who are able to bring forth great reserves of strength and fortitude during times of stress, accepted the Depression as a personal challenge. She always had a job, she tried to find jobs for her family and hundreds of friends, and while she was looking propped up everyone’s limp spirits by defying big corporations. When the telephone company threatened to cut off our telephone because the bill hadn’t been paid, Mary marched right down to see the president and told him that if he cut off our phone and left us with no communication with the outside world, she was going to sue him personally. … “I told him a telephone and telegraph company is a public service operating under a special grant from the State. If you cut off my telephone, you will not be performing a public service and I will sue you. ”

While successful with the phone company, this tactic didn’t work when it came to their heat and the electricity, and they find themselves relying on old Christmas candles for light and firewood for heat: “When we ran out of fireplace wood, Mary unearthed a bucksaw and marched us all down to a city park two blocks away, where we took turns sawing up fallen logs. ”

Betty’s writing is a testament to the power of humor to help cope with adversity, and her humor also afforded her opportunities to comment on larger issues. As the Depression grinds on, she notes: “Now I grew more and more conscious of the aimlessness and sadness of the people on the streets, of the Space for Rent signs, marking the sudden death of businesses, that had sprung up over the city like white crosses on the battlefield and I lifted myself up each morning timidly and with dread. ” She doesn’t desert her boss, Mr. Chalmers, even though his business is clearly failing. She intends to stay until the end. “And I did, ” we read, “in spite of Mr. Chalmers’ telling me many times that the Depression was all my fault, the direct result of inferior people like me wearing silk stockings and thinking they were as good as people like him. ” And have we not heard this victim blaming rhetoric after every economic crisis, including the crash of 2008?

Some of the sentiments and words Betty uses are, arguably, dated and not politically correct. Still, they afford us an interesting window into our recent past and a glimpse of what life was like before the various civil rights movements, women’s rights, and political correctness. Betty is worth listening to just for the sheer entertainment value she provides – a wonderful combination of beautiful writing and laugh-out-loud humor – and for those who want more, her reflections can teach us much about coping with adversity.