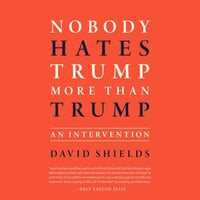 Nobody Hates Trump More Than Trump: An Intervention

NOBODY HATES TRUMP MORE THAN TRUMP: AN INTERVENTION is perhaps the only genuinely original thing you have read yet about Donald Trump. It can be read in a variety of ways: as a psychological investigation of Trump, as a philosophical meditation on the relationship between language and power, as a satirical compilation of the “collected wit and wisdom of Donald Trump,” and above all as a dagger into the rhetoric of American political discourse—a dissection of the politesse that gave rise to and sustains Trump. The book’s central thesis is that we have met the enemy and he is us. Who else but David Shields would make such an argument, let alone pull it off with such intelligence, brio, and wit, not to mention leaked off-air transcripts from Fox News?

“The best book, so far, on the political and cultural implications of Trump’s presidency. Shields has the widest range of curiosity of any American writer I’m aware of, and he almost never wastes your time. He nails what’s off-kilter and crazy about Donald Trump and the political psychosis he represents at least a hundred times, and in dozens of insightful ways. Shields is good enough, in this book, to earn the designation of being the writer most likely to be picked up and murdered should either right- or left-wing fundamentalists take power in the United States. This is a designation that hasn’t been conferred on an American writer since Philip K. Dick. What I’m saying is that Shields is that good. He is one of a very small group of true 21st century writers worthy of the tag, and I salute him as a master.”

“You're unlikely to encounter another book so recklessly and unpredictably full of insight, even wisdom. Shields is the most exciting writer we have in America at the moment, the most startling and innovative.”

“A sobering, nuanced, and—at times—brutally funny—psychological investigation into why Trump resonates with all, even the people who hate him.”

“A mesmerizing study of power, how it isolates, how it infantalizes, how it amplifies our collective fears.”

“A compelling book offering something to offend nearly anyone.”

“Nobody Hates Trump More Than Trump has something new to say.”