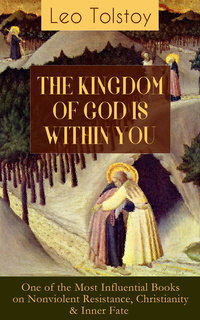 The Kingdom Of God Is Within You (One Of The Most Influential Books On Nonviolent Resistance, Christianity & Inner Fate)

The Kingdom Of God Is Within You (One Of The Most Influential Books On Nonviolent Resistance, Christianity & Inner Fate)

Автор: Leo Tolstoy
Формат: Е-книга
Английски
This carefully crafted ebook: “THE KINGDOM OF GOD IS WITHIN YOU (One of the Most Influential Books on Nonviolent Resistance, Christianity & Inner Fate)” is formatted for your eReader with a functional and detailed table of contents.

In the 1870s Tolstoy experienced a profound moral crisis, followed by what he regarded as an equally profound spiritual awakening, as outlined in his non-fiction work A Confession. His literal interpretation of the ethical teachings of Jesus, centering on the Sermon on the Mount, caused him to become a fervent Christian anarchist and pacifist. Tolstoy's ideas on nonviolent resistance, expressed in such works as The Kingdom of God Is Within You, were to have a profound impact on such pivotal 20th-century figures as Mohandas Gandhi, Martin Luther King, Jr. , and James Bevel. In this treatise Tolstoy explains that he feels that the Church's doctrines are mistaken because they have made a “perversion” of Christ’s true teaching. He then goes on to explain what those teachings are and how one can become a true Christian in this war prone world. The title of the book is taken from Luke 17:21. In the book Tolstoy speaks of the principle of nonviolent resistance when confronted by violence, as taught by Jesus Christ. When Christ says to turn the other cheek, Tolstoy asserts that Christ means to abolish violence, even the defensive kind, and to give up revenge. Tolstoy rejects the interpretation of Roman and medieval scholars who attempted to limit its scope. “How can you kill people, when it is written in God’s commandment: 'Thou shalt not murder’?” Tolstoy took the viewpoint that all governments who waged war are an affront to Christian principles.

Content:
Introduction:
Leo Tolstoy: A Short Biography
“Tolstoy the Artist” and “Tolstoy the Preacher” by Ivan Panin
The Kingdom of God is Within You
Autobiographical:
Reminiscences of Tolstoy, by His Son by Graf Ilia LvovichTolstoi
My Visit to Tolstoy by Joseph Krauskopf
Преводач: Leo Wiener
Повече информация за е-книгата
Издателство: e-artnow
Публикувана: 2016-04-05
ISBN: 9788026852490
Английски
Категория: Класика

The Art of War: The Essential Translation of the Classic Book of Life

The Problems of Philosophy - The Original Classic Edition