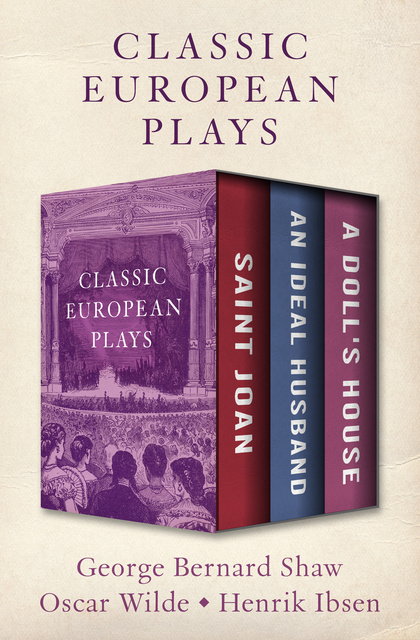 These three timeless plays showcase the sparkling wit and provocative intellect of some of modern drama’s greatest playwrights.

Saint Joan by George Bernard Shaw: This complex drama depicts the life of Joan of Arc—from her childhood vision calling her to lead the French army against the English in the Hundred Years War through her eventual capture, trial, and burning at the stake. An epilogue depicts a retrial that clears Joan of heresy, declaring her a Christian martyr.

An Ideal Husband by Oscar Wilde: In this timeless drawing room comedy, a blackmail scheme forces a married couple to reexamine their moral standards—providing a wry commentary on the hypocrisy of politicians. Carried along by nonstop witty repartee, this is satirical theater at its finest.
A Doll’s House by Henrik Ibsen: This quintessential work of dramatic realism depicts one woman’s struggle against patriarchal society. The central character’s rejection of a smothering marriage shocked theatergoers of the late nineteenth century while the play’s pioneering style set the stage for twentieth century domestic drama.