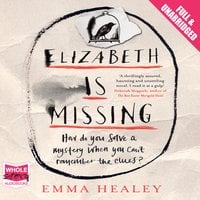 How do you solve a mystery when you can't remember the clues?

Maud is forgetful. She makes a cup of tea and doesn't remember to drink it. She goes to the shops and forgets why she went. Sometimes her home is unrecognizable - or her daughter Helen seems a total stranger. But there's one thing Maud is sure of: her friend Elizabeth is missing. The note in her pocket tells her so. And no matter who tells her to stop going on about it, to leave it alone, to shut up, Maud will get to the bottom of it. Because somewhere in Maud's damaged mind lies the answer to an unsolved seventy-year-old mystery. One everyone has forgotten about. Everyone, except Maud . . .

'Elizabeth Is Missing will stir and shake you: the most likeably unreliable of narrators, real mystery at its compassionate core...' Emma Donoghue, author of Room

'Every bit as compelling as the frenzied hype suggests. Gripping, haunting' Observer