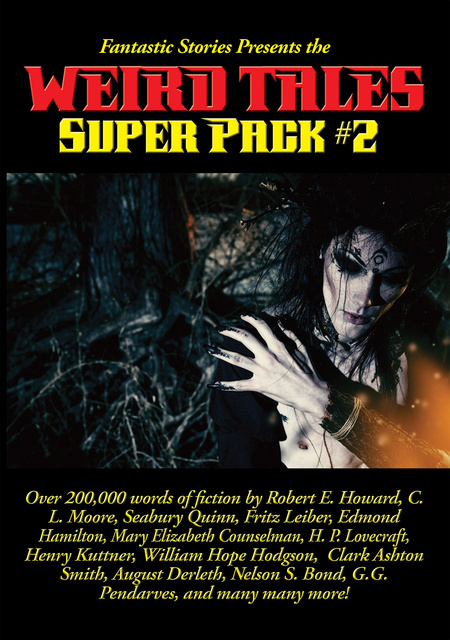 Weird Tales' launched in March of 1923 and the world was never the same again. While pulp magazines had been around for some time, 'Weird Tales' was the first pulp magazine to specialize in supernatural fiction. 'Weird Tales' single-handedly created the field of genre fiction as we know it. No longer did readers of Fantasy, Science Fiction, and Horror have to seek out single stories in otherwise mundane magazines; now they had a magazine all of their own that published only the stories they wanted to read. Collected in this anthology are over two hundred thousand words of some of the greatest stories ever published in the pages of 'Weird Tales'. Included are:

'Red Nails' by Robert E. Howard
'The Tree of Life' by C. L. Moore
'Birthmark' by Seabury Quinn
'Spider Mansion' by Fritz Leiber
'Evolution Island' by Edmond Hamilton
'The Monkey Spoons' by Mary Elizabeth Counselman
'The Diamond Lens' by Fitz-James O’Brien
'The Dunwich Horror' by H. P. Lovecraft
'The Salem Horror' by Henry Kuttner
'The Haunted Burglar' by W. C. Morrow
'The Lost Gods' by Dorothy Quick
'The Terror Of The Water-Tank' by William Hope Hodgson
'The White Feather Hex' by Don Peterson
'The Death of Ilalotha' by Clark Ashton Smith
'Each Man Kills' by Victoria Glad
'The Disc Recorder' by August Derleth
'The Doors of Death' by Arthur B. Waltermire
'Where Are You Mr. Biggs?' by Nelson S. Bond
'The Invaders' by Benjamin Ferris
'The Three Pools and the Painted Moon' by Frank Owen
'Werewolf of the Sahara' by G.G. Pendarves
'The People of the Black Circle' by Robert E. Howard