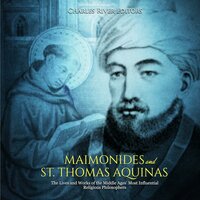 Maimonides and St. Thomas Aquinas: The Lives and Works of the Middle Ages’ Most Influential Religious Philosophers

Moses Ben Maimon, frequently called Maimonides, was a medieval philosopher who revolutionized thinking about ethics, reason, and the Jewish Torah through his emphasis on reason and evidence. His works were broadly accepted by the Sephardi Jewish community and spread across the medieval world, reaching the Jewish populations as far as Yemen, and though he lived in the 12th century, Maimonides continues to be one of the most studied scholars of Jewish law, philosophy, and theology. Many consider him forward-thinking for his time, and his texts continue to reach numerous modern audiences through translations, commentaries, and in-depth study.

Maimonides’ ideas and theological interpretations remain influential in contemporary times. His work influenced numerous Jewish and Islamic scholars for centuries and contributed to the modern understanding of the Torah and Jewish law, while outside of religion, his ideas were popular topics in philosophy and went on to influence thinkers like Thomas Aquinas, Leibnitz, Leo Strauss, and the Humanist intellectual movement. Of particular importance was his emphasis on personal humility, forming decisions based on a body of evidence, and reasoning through arguments before arriving at a conclusion. His work was diverse, forward-thinking for his time, and demonstrated his intellectual pursuits across numerous fields. As a result, despite living almost 1,000 years ago, he continues to be one of the most influential scholars of ethics and Jewish philosophy and law due to the comprehensive and rationalist nature of his work.

It would be hard to overstate the influence that St. Thomas Aquinas (1225-1274) has had on both the Catholic world and the West as a whole over the last 750 years. Even in secular circles, Aquinas is known as one of the most important medieval philosophers, and in many respects a harbinger of the Renaissance that began to flourish across Europe in the centuries that followed his life. His groundbreaking work, Summa Theologica, remains one of the most influential philosophical texts in history, earning him a place in the pantheon alongside Plato, Aristotle, and Socrates.

Aquinas had just as great an influence on Christianity as well. His philosophical works forged and established natural theology, squaring Catholicism with reason and logic, the ideals and aspects of modern thought that really took hold during the Renaissance. With his work on logic, theology, and metaphysics, as one of the Church’s Doctors, Thomas Aquinas remains the Catholic Church’s greatest theologian and philosopher, and he is still held out by the Church as the role model for those studying to become a Catholic priest.