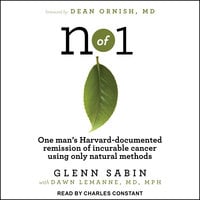 N of 1: One man's Harvard-documented remission of incurable cancer using only natural methods

Twenty-five years ago my doctors had no cure for my cancer. So I went on a quest to find my own treatment. This is my story …

In 1991, Glenn Sabin was a twenty-eight-year-old newlywed diagnosed with chronic lymphocytic leukemia (CLL)–a disease doctors called "uniformly fatal." Treatments could buy him some time and eventually ease his discomfort, but there was no conventional cure. Glenn's prognosis was clear: he was going to die.

Although Glenn and his wife, Linda, continued to consult with doctors, cancer specialists and top oncologists, Glenn made a monumental decision: he would become his own health advocate. While he continued to "watch and wait, " Glenn would figure out how to stay alive.

No one could predict when a large-scale clinical trial would discover a cure for CLL, so Glenn began his own, medically monitored and carefully researched lifestyle changes. He would conduct his own, single patient clinical trial.

Today, Glenn is not only alive, but a 2012 biopsy at Harvard confirmed that his bone marrow contains no leukemic cells. His case is now part of the medical literature.