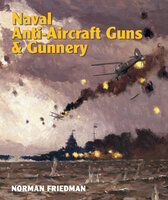 A winner of the Samuel Eliot Morison Award for Naval Literature gives “an excellent overview of the problems involved in shooting at airplanes from ships. ” (Coast Defense Journal).

This book does for naval anti-aircraft defense what the author’s Naval Firepower did for surface gunnery—it makes a highly complex but historically crucial subject accessible to the layman. It chronicles the growing aerial threat from its inception in the First World War, and the response of each of the major navies down to the end of the Second, highlighting in particular the widely underestimated danger from dive-bombing.

Central to this discussion is an analysis of what effective AA fire-control required, and how well each navy's systems actually worked. It also takes in the weapons themselves, how they were placed on ships, and how this reflected the tactical concepts of naval AA defense. Renowned military historian Norman Friedman offers striking insights he argues, for example, that the Royal Navy, so often criticized for lack of “air-mindedness, ” was actually the most alert to the threat, but that its systems were inadequate—not because they were too primitive but because they tried to achieve too much.

The book summarizes the experience of WW2, particularly in theaters where the aerial danger was greatest, and a concluding chapter looks at post-1945 developments that drew on wartime lessons. All important guns, directors and electronics are represented in close-up photos and drawings, and lengthy appendices detail their technical data. It is, simply, another superb contribution to naval technical history by its leading exponent.