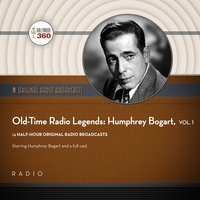 One of Hollywood’s true screen legends, Humphrey Bogart, is spotlighted in this collection of radio broadcasts that he starred in.

Humphrey Bogart began his screen career mostly playing gangsters due to his resemblance to John Dillinger. Bogart’s breakthrough from supporting roles to A-list stardom came with his performances in High Sierra and The Maltese Falcon. His first true romantic lead role, Casablanca, co-starred Ingrid Bergman. He and Lauren Bacall fell in love when they appeared together in To Have and Have Not. They continued acting on the screen together in The Big Sleep, Dark Passage, and Key Largo. Bogart would win an Academy Award for his performance in The African Queen co-starring Katharine Hepburn. In the 1950s he was still going strong with The Caine Mutiny, Sabrina, and The Barefoot Contessa. In between film work, he enjoyed appearing on radio, often with his wife, Lauren Bacall. Here are fourteen examples of his radio work spanning 1943 until 1952.