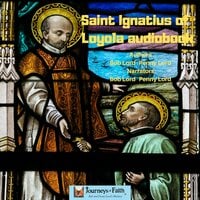 Saint Ignatius of Loyola discovered a dark cave, virtually unknown because it was so overgrown with brush.

There, he would spend hours, sometimes all through the night, praying without interruption, except for the occasional sounds of God's four-legged and winged creatures calling out to one another.

The cave at Manresa was a battlefield, a lonely battlefield, with Ignatius battling one temptation, winning that battle only to be put to the test with another temptation and another battle.

Among other struggles, Saint Ignatius of Loyola imagined himself guilty of all types of sins, mistaking venial sin for mortal sin, battling alleged scruples and scrupulosity to the point of near desperation.

He did not know where to turn; it seemed to him that God had deserted him.

Then, he remembered hearing that God would come to his aid, if he fasted until his petition was granted.

Saint Ignatius of Loyola fasted from Sunday to the following Sunday.