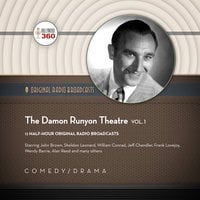 Damon Runyon was a newspaperman and writer. He was best known for his short stories celebrating the world of New York City’s Broadway that grew out of the Prohibition era. He created a little world of characters that live on even today in such classic movies as Little Miss Marker and Guys and Dolls, both based on Runyon’s stories.

Actor Alan Ladd’s Mayfair Productions brought Runyon’s short stories to radio in the early 1950s. Each episode of The Damon Runyon Theatre is told through the eyes of a hoodlum with a heart of gold named “Broadway,” who takes the listener inside the world of some of the Big Apple’s toughest yet most charming perpetrators. Broadway and the many thugs, touts, dames, and palookas he encounters speak in a thick present-tense Brooklynese that is a delight for the listener to hear.

John Brown played Broadway, and the supporting casts were a who’s who of radio, including William Conrad, Alan Reed, Frank Lovejoy, Sheldon Leonard, Hans Conreid, Anne Whitfield, and Ed Begley. The series made a brief transition to television.

Included here are the following episodes, which aired from October 1950 to January 1951: