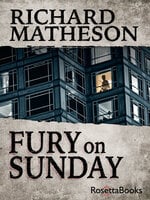 An early pulse-pounding thriller from the Twilight Zone scribe and multi-award-winning author of I Am Legend.

Vincent was a brilliant pianist, but a disturbed personality. The asylum he was committed to could not hold him. He escaped on an early Sunday morning, bent on revenge against those who betrayed him—his manager and the man who married his lover, Ruth.

With his temper spiraling out of control, Vincent pursued his prey without mercy, brutally slaughtering anyone who got in his way. For four hours he would terrorize a community. His rage would not be sated no matter how much blood he spilled. And he refused to let anyone keep him from Ruth ever again …

Richard Matheson, “one of the great names in American terror fiction, ” unleashes a relentless novel of chilling suspense in Fury on Sunday (The Philadelphia Inquirer).

“The author who influenced me the most as a writer was Richard Matheson. ” —Stephen King

“Perhaps no other living author is as responsible for chilling a generation with tantalizing nightmare visions. ” —The New York Times

“Matheson’s a writer who just has the special knack, the deft skill to imagine terrifying scenarios on any scale, large and small, and give them chilling possibility. ” —Los Angeles Times