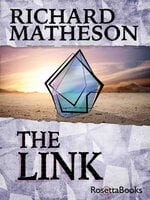 From the iconic author of I Am Legend: The fascinating, unfinished teleplay of a saga encompassing the Titanic, Jack the Ripper, and the paranormal.

Richard Matheson, the celebrated Twilight Zone scripter, explored his interests in metaphysics, spiritualism, and parapsychology in such stories as Hell House, Somewhere in Time, and What Dreams May Come. In the early 1980s, he approached the ABC television network with a twenty-hour mini-series about such phenomena in contemporary times—and included two in-depth historical accounts of the psychic events related to the Jack the Ripper murders and in the Titanic disaster.

Titled The Link, Matheson turned in a 557-page outline that ABC executives requested he condense into seven hour-long episodes. Unable to realize his original vision under such restrictions, Matheson abandoned the television project and attempted to novelize the outline. After writing 800 pages that only comprised the first part of the novel, he decided it was too unwieldy and moved on to other stories.

Now, Matheson’s fans can discover what might have been with this publication of The Link, which includes the entire original outline as well as part of the teleplay. The story follows Robert Allright, a writer working with paranormal investigator Cathy Graves to decipher a mystery unearthed by his father in an Arizona archeological dig. Allright’s only clue is the mystifying crystal that his father believes is the key to a great discovery.

“The author who influenced me the most as a writer was Richard Matheson. ” —Stephen King