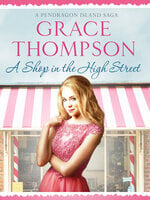 A Shop in the High Street

Family rivalries and bitter disputes set a once-peaceful town alight in the fifth of Grace Thompson’s well-loved Pendragon Island sagas
Edward Jenkins has long dreamt of opening a sports shop in the small Welsh town of Pendragon Island. So, when Edward’s parents pass away, leaving the Montague Court Hotel to their two children, he glimpses the possibility of his ambitions being realised. His sister Margaret, however, has her own plans for their inheritance and the determination to see them through. Can Edward stand up to her for the very first time?

Rhiannon and Charlie Bevan are keen to start a family, but her father Lewis is living with them, and he still refuses to accept that their marriage will be a happy one. If only they could find a way to reunite him with her mother Dora, they could finally have the home they’ve dreamed of…

Meanwhile Megan – one of the scandalous Weston Girls – is pregnant, but has refused to marry the father, freeloading Terrence Jenkins. As she begins to help Terrence’s cousin Edward with the plans for his shop, all he can think of is their friendship growing into something more. But what could a girl like Megan ever see in him?

As another year passes in this tiny coastal community, the happiness and heartaches of its inhabitants continue to prove as intriguing and captivating as ever.