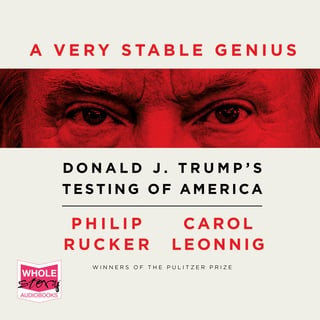 Drawing on nearly three years of reporting, hundreds of hours of interviews and more than two hundred sources, including some of the most senior members of the administration, friends and first-hand witnesses who have never spoken before, Philip Rucker and Carol Leonnig take us inside some of the most controversial moments of Trump's presidency. They peer deeply into Trump's White House – at the aides pressured to lie to the public, the lawyers scrambling to clear up norm-breaking disasters, and the staffers whose careers have been reduced to ashes – to paint an unparalleled group portrait of an administration driven by self-preservation and paranoia.

Rucker and Leonnig reveal Trump at his most unvarnished, showing the unhinged decision-making and incompetence that has floored officials and stunned foreign leaders. They portray unscripted calls with Vladimir Putin, steak dinners with Kim Jong-un, and calls with Theresa May so hostile that they left her aides shaken. They also take a hard look at Robert Mueller, Trump's greatest antagonist to date, and how his investigation slowly unravelled an administration whose universal value is loyalty - not to country, but to the president himself.

Grippingly told, A Very Stable Genius is a behind-the-scenes account of Trump's vainglorious pursuit of power in his first term – the rages and the frenzies, the dishonesty and the depravity – as his remaining loyal staffers eye the exits, and he stares down the reality of impeachment.

Unbelievable: My Front-Row Seat to the Craziest Campaign in American History

The Room Where It Happened: A White House Memoir

Too Much and Never Enough: How My Family Created the World's Most Dangerous Man

Nobody Hates Trump More Than Trump: An Intervention

The Enemy of the People: A Dangerous Time to Tell the Truth in America

Trump Revealed: The Definitive Biography of the 45th President

Unhinged: An Insider's Account of the Trump White House

The Art of Her Deal: The Untold Story of Melania Trump

Audience of One: Television, Donald Trump, and the Politics of Illusion

Team of Five: The Presidents Club in the Age of Trump

Summary of The Dangerous Case of Donald Trump: 37 Psychiatrists and Mental Health Experts Assess a President by Brandy X. Lee