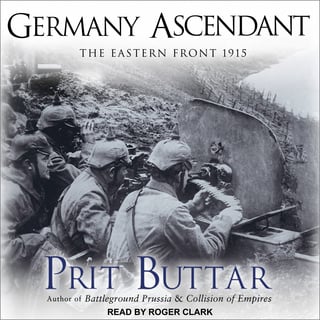 Scritto da: Prit Buttar
Letto da: Roger Clark
Formato: Audiolibro
20H 45Min
Inglese
3,65
The massive offensives on the Eastern Front during 1915 are too often overshadowed by the events in Western Europe, but the scale and ferocity of the clashes between Imperial Germany, Hapsburg Austria-Hungary, and Tsarist Russia were greater than anything seen on the Western Front and ultimately as important to the final outcome of the war. Now, with the work of internationally renowned Eastern Front expert Prit Buttar, this fascinating story of the unknown side of the First World War is finally being told.

In Germany Ascendant, Buttar examines the critical events of 1915, as the German Gorlice-Tarnow Offensive triggered the collapse of Russian forces, coming tantalizingly close to knocking Russia out of the war altogether. Throughout the year, German dominance on the Eastern Front grew-but stubborn Russian resistance forced the continuation of a two-front war that would drain Germany's reserves of men and equipment. From the bitter fighting in the Carpathian Mountains, where the cragged peaks witnessed thousands of deaths and success was measured in feet and inches, to the sweeping advances through Serbia where the capital Belgrade was seized, to the almost medieval battle for the fortress of Przemysl, this is a staggeringly ambitious history of some the most important moments of the First World War.
Più informazioni
Editore: Tantor Audio
Pubblicato: 2018-06-12
ISBN: 9781977381705
20H 45Min
Inglese
3,65
Categoria: Storia
Europa Germania Storia Prima Guerra Mondiale Russia