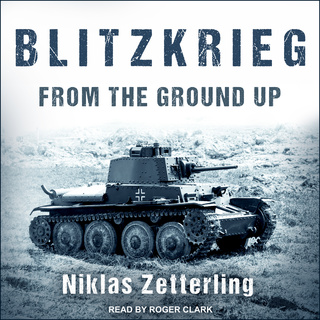 Scritto da: Niklas Zetterling
Letto da: Roger Clark
Formato: Audio
11H 58Min
Inglese
4,03
The successes of the German Blitzkrieg in 1939-41 were as surprising as they were swift. Allied decision-makers wanted to discover the secret to German success quickly, even though only partial, incomplete information was available to them. The false conclusions drawn became myths about the Blitzkrieg that have lingered for decades.

It has been argued that German victories in the early part of the war rested less upon newly developed tanks and aircraft and more on German military traditions: rather than creating a new way of war based on new technology, the Germans fitted the new weapons into their existing ideas on warfare. The conduct of German soldiers, particularly the lower-ranking men, on the battlefield was at the core of the concept, and German victories rested upon the quality of the small combat units.

This book focuses on the experience of the enlisted men and junior officers in the Blitzkrieg operations in Poland, Norway, Western Europe, and Russia. Military historian Niklas Zetterling explores how they operated, for example, how a company commander led his tanks, how a crew worked together inside a tank, and the role of the repair services. The author fits these narratives into a broader perspective to give the listener a better understanding of why the Germans were so successful in 1939-41.
Più informazioni
Editore: Tantor Audio
Pubblicato: 2019-05-28
ISBN: 9781977319906
11H 58Min
Inglese
4,03
Categoria: Storia
Storia Seconda guerra mondiale Europa Germania

Battle for the Ruhr: The German Army's Final Defeat in the West