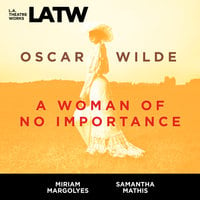 Devilishly attractive Lord Illingworth is notorious for his skill as a seducer. But he is still invited to all the "best" houses while his female conquests must hide their shame in seclusion. In this devastating comedy, Wilde uses his celebrated wit to expose English society's narrow view of everything from sexual mores to Americans. Adapted by Martin Jarvis.

Includes an interview with Oscar Wilde's only grandchild, Merlin Holland, who is also a noted biographer and editor of Wilde's works.

Directed by Michael Hackett. Recorded before a live audience at the DoubleTree Suites, Santa Monica in November of 1995.