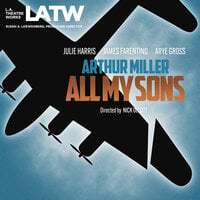 In Arthur Miller's classic drama, World War II is over, and a family mourning a missing son plants a memorial tree and tries to go on with their lives. When a storm blows down the tree, a devastating family secret is uprooted, setting the characters on a terrifying journey towards truth. A 1947 Tony Award Winner for Best Author. A co-production with The Smithsonian Associates, Voice of America, and Arena Stage.

Includes an interview with historian Bill Yenne, author of The American Aircraft Factory in World War Two, one of his many works that chronicle the history of wartime aviation and manufacturing.

Directed by Nick Olcott. Recorded before a live audience at Voice of America, Washington D.C. in February of 2000.