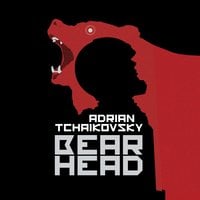 In a sequel to the much-praised Dogs of War, Honey the genetically engineered bear takes a ride in Jimmy the Martian's head and starts a revolution on the Red Planet.

Mars. The red planet. A new frontier for humanity: a civilization where humans can live in peace, lord and master of all they survey.

But this isn't Space City from those old science-fiction books. It's more like Hell City, built into and from a huge crater. There's a big silk canopy over it, feeding out atmosphere as we generate it, little by little, because we can't breathe the air here.

I guess it's a perfect place to live, if you want to live on Mars. At some point I must have wanted to live on Mars, because here I am. The money was supposed to be good, and how else was a working Joe like me going to get off-planet exactly? But I remember the videos they showed us – guys, not even in suits, watching robots and bees and Bioforms doing all the work – and they didn't quite get it right…